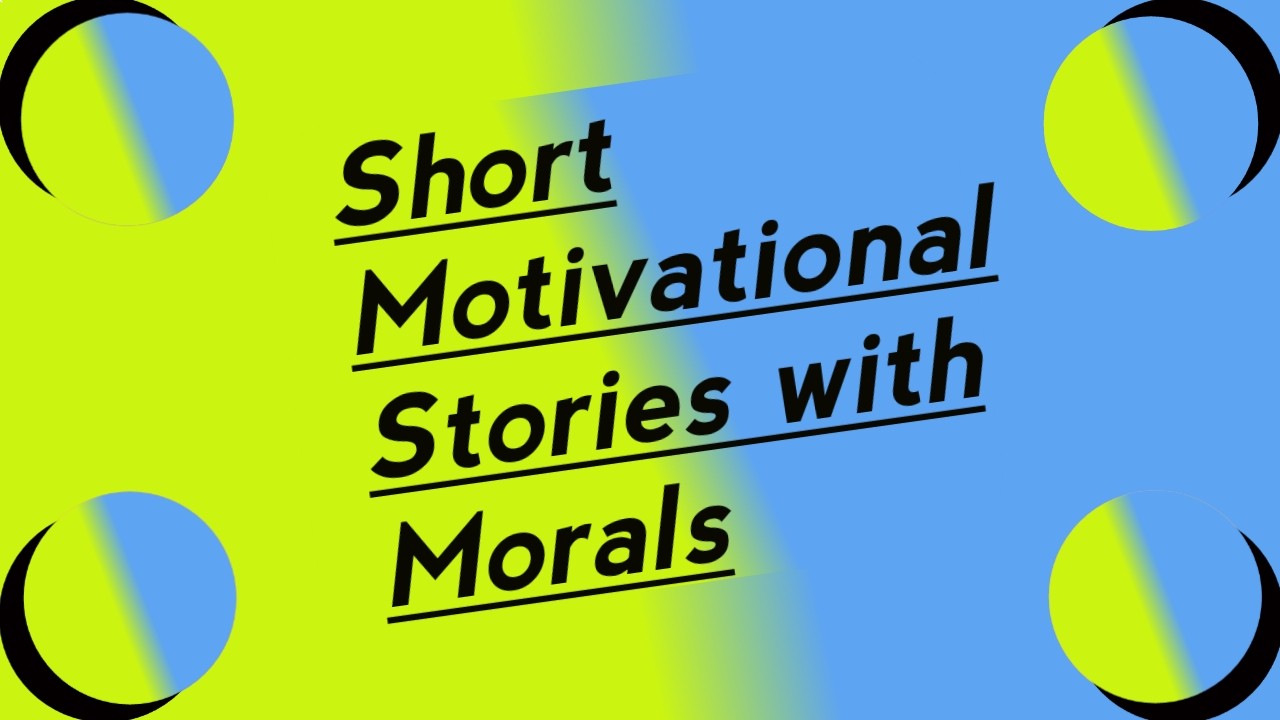 In this article, I’m going to write some short motivational stories with morals for students. If you’re interested, keep reading this article.

All the stories are very short. The purpose of these short motivational stories with morals is that you can learn valuable lessons in a few minutes.

So, without wasting your time, let’s get started.

Here are seven short motivational stories with morals. Read them all one by one.

A sage lived with two of his disciples in a monastery.

One day when the sage was taking his last breath, he called both of his disciples to him and said, “A few feet below where he sleeps, there is a pitcher full of gold, so when I die, both of you have to take the pitcher so that you can live life richly.”

Saying this, he died. After performing the last rites of the sage, both started digging the place simultaneously. One of them kept digging for a long time but he couldn’t find the pitcher due to which he got upset and left the place.

Seeing him leaving, the other asked him to be patient but he didn’t listen to him and went away.

The story teaches us that you will get the fruits of your hard work only when you have patience.

Once a student got fond of speaking fluent English. He was pursuing his graduation at that time. Every time he used to postpone thinking that he would start learning from tomorrow. Many years passed by doing so.

Now, he was forty years old but his interest in speaking English fluently didn’t subside. This time, he determined that he would definitely learn to speak fluent English and started going to an English-speaking class the next day.

He faithfully attended the class for two years and practiced speaking at home as much as he could. Now, he was proficient in Speaking English.

Having seen this skill of him, all his friends and relatives were surprised.

The moral of the story is that there is no age limit to learn anything, you just have to start over.

Anshul was very adept at playing cricket. He had a dream that one day he would become a big cricketer. Seeing his dedication, his parents got him enrolled in the Cricket Academy. He worked very hard for about five to six years.

He started playing so well that he got selected at the state level.

The next day, when he woke up in the morning, he felt that half of his body was not working. When he was taken to the hospital, it was found that he was paralyzed.

He was very sad to hear this. It took him two years to get fit again but he didn’t let his dream die. He started working hard again. Once auditions were going on to play at the country level. He participated in that and got selected. He hit a century in his first match, which made him famous all over the country.

The story teaches us that sometimes circumstances make us stand at such a point that we break our hopes but we shouldn’t do that, rather we should keep trying.

Once a District Magistrate went out on a scooter to visit the area quietly. He used to do so often to know about the activities going on in his area.

Hearing his abuses, the magistrate got down from the scooter, got him out of the car and said, “First of all, you’re driving in the wrong way, additionally you’re abusing me, this behavior is not good at all.”

In response, the driver of the car started shouting. The magistrate asked him to calm down and said that he was the District Magistrate. Now, the car driver was stunned and felt sorry for what he had done.

The moral of the story is that we should always speak politely to others otherwise it may take a toll on us.

A father loved his family very much. He had only one son who was born out of many vows. When he was born, doctors told him that his son had a brain tumor. However it wasn’t a big danger, but it might have to be operated in the future. He was deeply saddened by it.

When his child grew a little, the tumor started causing problems, so he took him to a hospital where doctors told him that if they operated on his child, the child might die, which made the child’s father very sad.

Now, only God could save his child. Trusting God, he agreed to get the child operated on by the doctors.

He and his wife continued to worship the Lord as long as the operation of his child continued. About five hours later, the doctors came to him and said, “His child is fine now.”

The story teaches us that sometimes we should move forward by trusting in God regardless of the odd circumstances.

Only rich people used to contest elections in Yamunanagar. Whoever stood in the election would do anything to win, whether it was the distribution of food or money.

The one who distributed much money won the election and then exploited the poor and uneducated people.

A wise and educated man lived in the same town. He told the whole scenario to all the townspeople. He explained, “Everyone lures you money before elections and then after winning exploits you and doesn’t even develop the town.”

Therefore, he expressed his desire to contest the elections in front of the townspeople and assured them that if he won, he would develop the town.

Other candidates tried a lot to defeat him but his will was very strong and luckily he won the election. After winning the election, he did a lot of development of the town. Now, the people of the town were very happy.

The moral of the story is that if we’re educated and have a strong will, we can do anything.

There was a man who was very hardworking. He was so ambitious that he wanted to start his own business so he started a small samosa shop in the city.

With time his shop became famous all over the city and people from far and wide started coming to his shop to eat samosas. Now, he was a little old, so his son started taking care of the shop.

Since his son was very much interested in betting, he started wasting money earned by his father. His father explained a lot to him that he should invest money in the right place, otherwise he will be ruined one day.

He explained him many times, but instead of listening, he used to scold him and sometimes become so hyper that he would even beat him.

One day his father left the city and returned to the village after selling his shop. When his son went to the shop, it was occupied by other people. Now, he had nothing.

The moral of the story is that we should always respect our parents because if they stop caring, you will be of nowhere.

Eventually, I hope that the article must have satisfied you. Here, all are the best short motivational stories with morals.