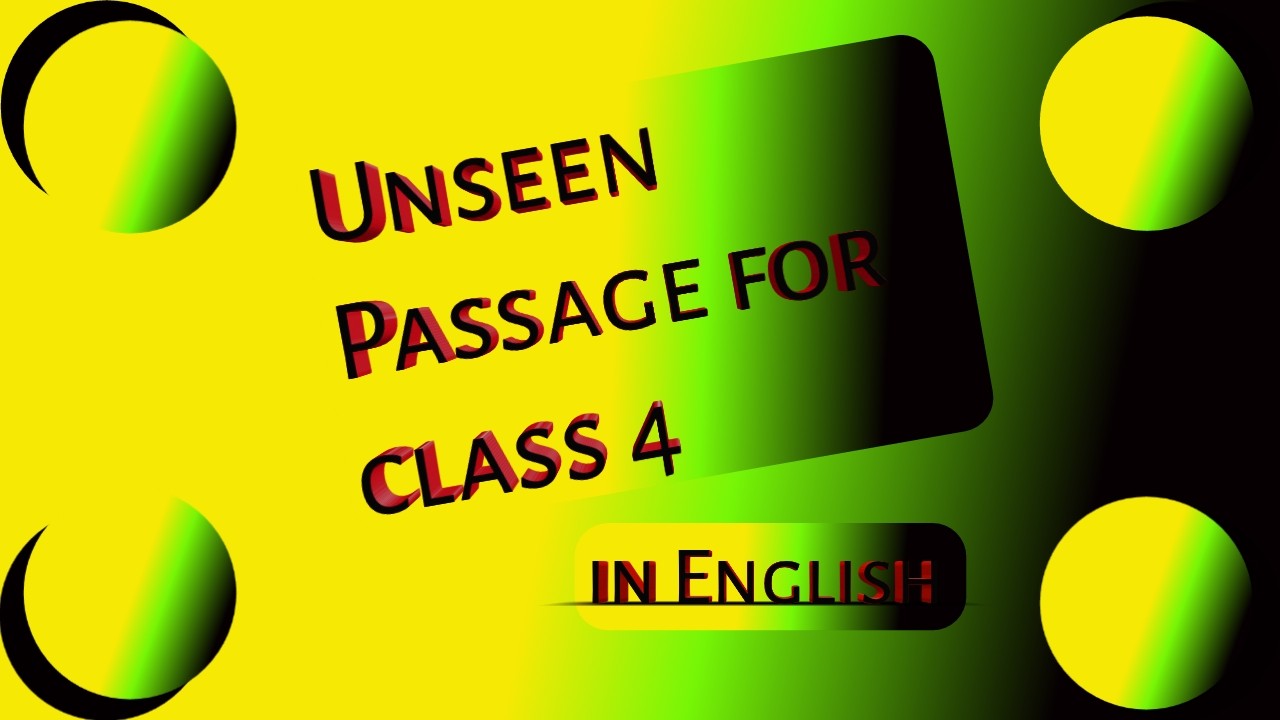 Are you looking for an unseen passage for class 4 in English? if yes, you have come to the right place.

Unseen passages are so important that they are asked in almost all the classes. So, I thought why I shouldn’t write an article on it. Well, I have already written some articles on unseen passages, but they were related to other classes, and today, I’ve written unseen passages for class 4.

That means, here you will get all the unseen passages for class 4.

Hence without wasting your valuable time, let’s get started.

Read some other unseen passages to practice.

Here, I’ve written some unseen passages for class 4 so that you can practice better.

Also, see some of the best unseen passages for class 4th.

1. Unseen passage for class 4 in English | A Lazy Brother

Kavita’s brother is very lazy. His name is Vishal and he is fourteen years old. He wakes up late every morning at around nine. He gets ready very quickly within 20 minutes.

His online classes start at 10 am and end at 3 pm. During his classes, he looks very sad and inactive. He has lunch around 1 o’clock. After having lunch, he rests for 20 minutes as the classes are closed for a while.

As the online classes end, he stands up and runs to play a cricket match. It’s one of his favorite games. Some time back, he used to play football but due to an accident, he doesn’t like that game.

He completes his homework at night and always eats dinner after completing his work.

1. What is the name of Kavita’s brother?

2. At what time does Vishal take his lunch?

3. After lunch, he rests for

4. What is the name of his favorite game?

5. When does he complete his homework?

Practice for some unseen passages with answers from higher classes.

2. Unseen passage for class 4 in English | The Sun

The Sun is a star around which many planets revolve such as Mercury, Venus, Earth, Mars, Jupiter, etc. The nearest planet to the Sun is Mercury and Neptune is the farthest one. There is a total of eight planets in the solar system.

The sun is a ball of gasses like helium, oxygen, carbon, and hydrogen but it has the largest amount of helium and hydrogen gas. The temperature of the outer surface of the Sun is about 5500°C, which is very high.

Also, there are some such stars that are bigger and brighter than the Sun in the entire galaxy.

1. Write the names of any three planets.

2. Which planet is the nearest to the Sun?

3. What is the temperature of the outer surface of the Sun?

4. When does a solar eclipse occur?

5. How many planets are there in the solar system?

2. The nearest planet to the sun is Mercury.

3. The temperature of the outer surface of the Sun is about 5500°C.

4. A solar eclipse occurs when the Moon comes between the Sun and the Earth.

5. There is a total of eight planets in the solar system.

3. Unseen passage for class 4 in English | The Lord Vishnu

Lord Vishnu is one of the most famous Gods in Hinduism. It’s written in the Puranas that the wife of Lord Vishnu is Lakshmi. He is considered to be the sustainer of the world. It’s believed that he lives in the Kshira Sagara that is also known as the ocean of milk.

Lord Vishnu has four arms in which he holds lotus, mace, conch, and chakra.

There are altogether ten incarnations of Vishnu, some of whom are Narasimha, Rama, Krishna, Varaha, and Parashurama.

1. Who is the wife of Lord Vishnu?

2. Jagannath temple is located in

3. Where does Lord Vishnu live?

4. How many arms does Lord Vishnu have?

5. One of the Lord Vishnu’s incarnations is

See the article on some advanced unseen passages.

4. Unseen passage for class 4 in English | A Versatile Actor

Dilip Kumar was a well-known name in the 20th century. He was born in Pakistan. After coming to India, he became a very versatile actor.

His real name was Mohammad Yusuf Khan. At the age of 44, he married Saira Banu whose age was 22 years at the time of marriage.

Dilip Kumar was honored with Dadasaheb Phalke in 1995. He played tragic roles in many movies, so he was also called the Tragedy King. He died on 7 July 2021 due to prolonged illness.

1. Where was Dilip Kumar born?

2. When did he get married?

3. Write any three names of his films.

1. Dilip Kumar was born in Pakistan.

See also, the article on comprehension passages from upper classes.

Atul and Pratul are stepbrothers and they are twins. They study in the same class, so sometimes teachers get confused to recognize them.

Atul always wears a blue watch and Pratul wears a yellow watch. The height of Atul is a little more than that of Pratul.

They eat lunch together and play in the playground together. Atul is nine years old and Pratul is eight and a half years old.

Atul’s favorite fruit is the apple and he wants to eat an apple every day whereas Pratul doesn’t like fruits but prefers fast food like pizza and momos.

1. Who is nine years old, Atul or Pratul?

3. What is the color of Atul’s watch?

4. Who gets confused to recognize Atul and Pratul?

3. The color of Atul’s watch is blue.

4. Teachers get confused to recognize Atul and Pratul.

5. Atul’s favorite fruit is the apple.

Many people think of teeth as bone, but they are not made of bones. Actually, they are made of tissues.

The main function of teeth is to chew and bite food.

The roots of the teeth are surrounded by the gums. The beauty of a person’s face is also affected due to the lack of proper settlement of the teeth.

There are 20 teeth in children and 32 teeth in adults. Teeth erupt twice in humans. The first time, they are temporary but the second time, they become permanent.

( b ) Increase the beauty of the face

5. Name any two types of teeth.

7. Unseen Passage for Class 4 in English | The Mother

Our mothers work day and night without any salary. They are our mothers as well as our teachers and our best friends. They listen to us good stories and sometimes sing lullabies too.

To work selflessly, to be hardworking, to be courageous, and to have the spirit of sacrifice are the qualities of our mothers.

1. How many months do mothers keep us in the stomach?

2. What do mothers love the most?

3. Who works day and night without any salary?

4. What do mothers sometimes sing?

5. What are the qualities of our mothers?

1. Mothers keep us in the stomach for nine months.

2. They love their children the most.

3. Mothers work day and night without any salary.

5. To work selflessly, to be hardworking, to be courageous, and to have the spirit of sacrifice are the qualities of our mothers.

A student of class 4 can easily answer the given questions in unseen passages.