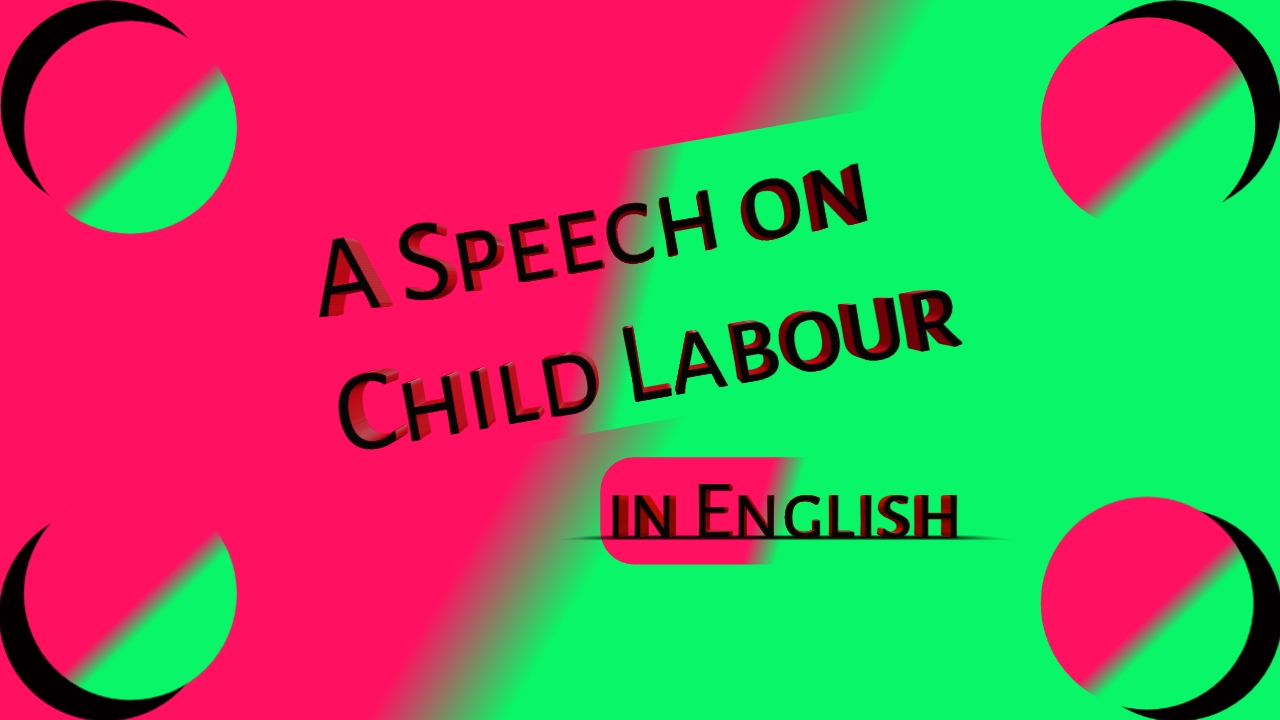 Giving a speech on child labour in your school or college can easily grab the attention of all the teachers and students.

So, you must prepare a speech on child labour.

In today’s time, it has become a very sensitive topic in our country. It’s so because somewhere child labour has increased very much.

That’s why I thought why I shouldn’t write an article on that.

A Speech on Child Labour in English for 2 & 5 Minutes –

Here are the speeches on child labour of 2 and 5 minutes duration. You can choose the best one which suits you the most.

Good morning to all, my name is Shubhi Gupta and I’m a student in class 8th. Today, I’m going to give a speech on child labour which is a very big problem in our country.

Actually, child labour is a curse for children as it not only affects the children physically but also mentally.

Moreover, child labour keeps children away from all kinds of pleasures, which are very essential for them at that age.

At the age in which children should enjoy, they start working at many places under the pressure of their parents to improve their financial condition.

So, the government considered it a very serious offence and implemented Child Labour Act in 1986 all over India.

This act doesn’t permit children to be engaged in any employment. It states that no child below the age of fourteen years will be employed to work.

If it’s found anywhere, very strict action will be taken against the responsible persons.

First of all, my greeting to all the respected teachers and students of the school.

My name is Sakshi Saxena and I’m from class 9th.

Today, I’ve got a chance to enlighten on a topic which has become a very big problem of our country and the topic is child labour.

As you all know that child labour is spread in every corner of the country and almost 4 % of the total child population in India is suffering from this problem.

Either they are working as main workers or marginal workers.

Actually, child labour is completely inhuman and precarious for the future of the children.

It affects the whole life of the children.

We can define child labour in many ways such as forcing children to beg on the streets, polishing shoes, selling flowers or other things to passersby etc.

These inhuman deeds greatly affect the lives of children.

So, in 1986 the government declared an act called Child Labor Act. The main reason for bringing the act was to prevent children from working prematurely.

In other words, this act was in favour of such compelled children who were forced to work in factories, shops, restaurants etc.

From the date of implementation of the act, no one can compel children to work. Nevertheless, the government has failed to stop child labour.

Even today the government is doing its best by initiating some movements against child labour, but it doesn’t seem easy.

Therefore being a child, I want to appeal to all of you that you should never force children to work so that their future can also be bright.

In the end, I’d say, thank you all very much for listening to me very carefully.

All the respected teachers and the Principal of the school, today I’m going to enlighten on a topic that is about child labour. If I make any mistake, please give me pardon.

My name is Pooja Awasthi and I belong to class 9th.

In India, child labour is considered a very serious crime.

Today, there are many places in India where child labour is at its peak. However, the government has put a strict ban on it, but it’s not getting unstopped.

There are only two types of people responsible for child labour.

First, those who are completely dependent on their children for their livelihood and secondly those who think of getting more work for less money.

Child labour has become a formidable problem in our country. To get rid of it, our government has implemented many restricted rules, but it’s not being stopped.

So, we all should take a pledge and stop forcing children to work.

Eventually, I hope that the article has proved to be very helpful for you. In this article, I’ve told you how to give a speech on child labour.

Here are speeches in different formats. Now, it depends on you which one you choose.