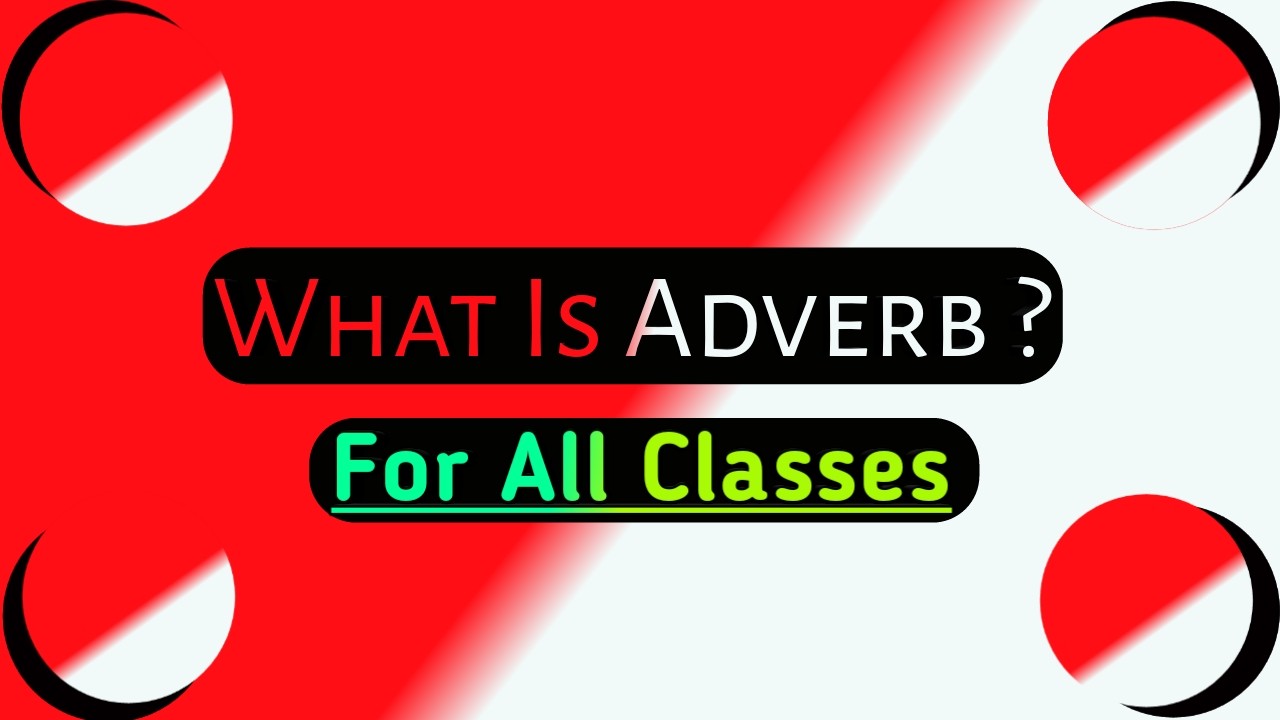 Today, I am going to discuss a topic that is about adverbs. It means, here you will know, what is adverb? and how to use it in sentences.

Normally, I have seen that the students use adverbs in the sentences in the wrong way. Sometimes, teachers also make the same mistake.

But, if you have better knowledge of this part of speech, I’m quite sure that there will be no problem with using adverbs in the sentences.

Hence, without wasting your valuable time let’s start the topic.

Read also, what is a pronoun?

What Is Adverb With Examples For All Classes ( 36 Examples ) –

An adverb is a word, which qualifies an adjective. In other words, an adverb qualifies a verb, adjective, adverb, preposition and a sentence as well.

( b ) Surendra is very beautiful.

( d ) Karan is flying the kite exactly over Vimal’s house.

Here, the word exactly is qualifying over ( preposition ).

( e ) Fortunately, I got an opportunity.

Here, the word, fortunately, is qualifying the whole sentence.

In all these examples, hard, very, exactly, fortunately are adverbs.

Now, I hope that you will completely have understood, what is adverb?

There are totally three types of adverbs.

Simple adverbs are the adverbs, which refer to time, place, number, reason, manner, degree and these are commonly seven types.

For example – late, now, after, ago, early, then, soon, today, tomorrow, etc.

For example – much, more, very, too, little, almost, quite, etc.

( e ) Adverb of Frequency or Number –

( a ) Ramesh doesn’t know where she is working now.

( c ) He will provide the right information when I tell the secret.

Some adverbs also have a degree of comparison like adjectives.

Some special cases of adverbs –

Keep in mind, the position of adverbs always matters. I’m giving some examples below to understand it.

All these sentences have different meanings due to the different positions of adverb ( only ).

Niggardly, Miserly, Cowardly, Scholarly ( All these are adjectives ).

( a ) Kamal faced the robbers Cowardly.

it’s a wrong sentence because cowardly is an adjective, it’s not an adverb and its right sentence will be, Kamal faced the robbers in a cowardly manner.

It’s a wrong sentence because miserly is an adjective, it’s not an adverb and its right sentence will be, he spent his money in a miserly manner.

3. Same words as adjective and adverb –

Where hard is an adverb.

Where hard is an adjective.

( c ) Run fast lest you should miss the train.

Where fast is an adverb.

Where fast is an adjective.

Where loud is an adverb.

( f ) The people should avoid taking in a loud tone.

Where loud is an adjective.

( b ) His father is very lucky that he has two sons and one daughter.

( c ) The shopkeeper is very honest.

( a ) Now, he is in very much better condition.

( b ) You are a very much luckier person.

( c ) Abhishek is very much wiser.

( 3 ) The adverb ( very ) is also used with the present participle.

( a ) The juggler presented his skills in a very interesting way.

( b ) The show was very entertaining.

Much is used with a comparative degree.

( a ) Iron man has much better powers than Hulk.

( b ) Nidhi is much wiser than Shivani.

At the same time, when the word ( enough ) is used as an adverb, it’s used just after the adjective.

( a ) Dinesh has enough money in his car.

Where enough is an adjective because it has been used just before the noun ( money ).

Where enough is an adverb because it has been used just after the adjective ( tall ).

Finally, I hope that the article must have fulfilled your needs and now you will have no doubt about, what is adverb? because I have covered all the important details about adverbs.

If you really enjoyed the article, please share it with those who need it.