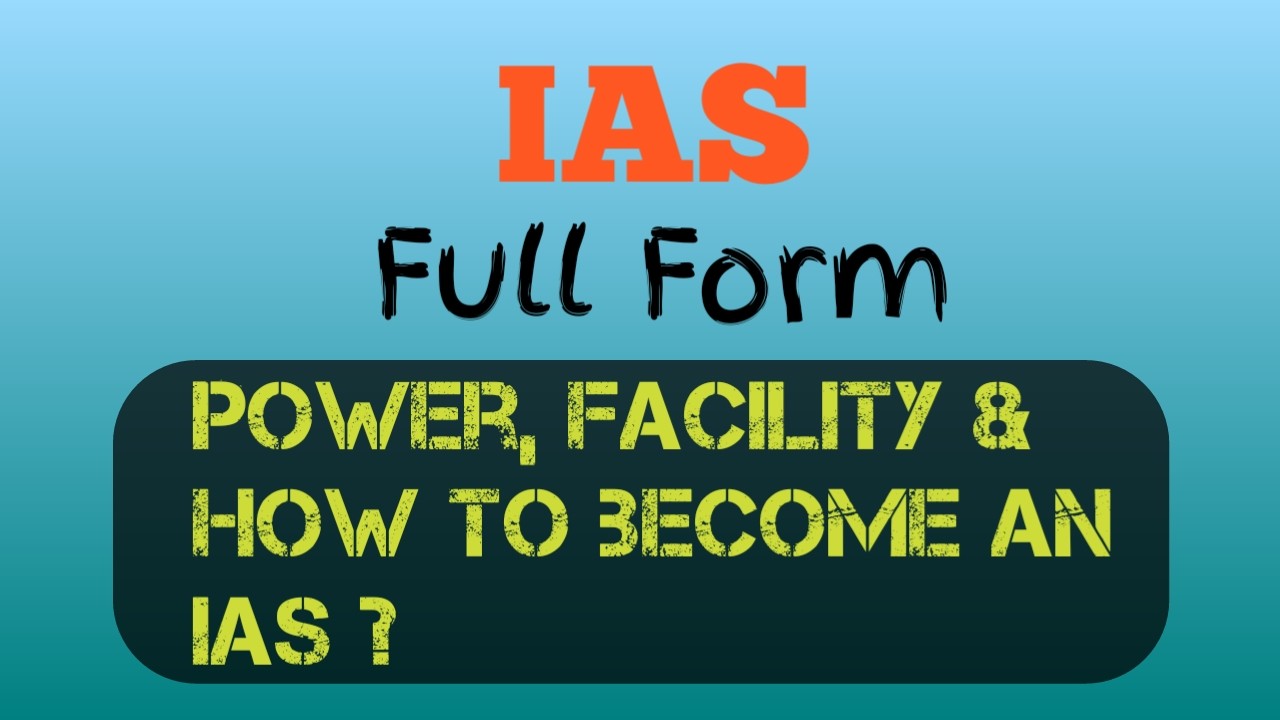 Are you looking for IAS full form or other related information? If yes, keep connected to know all about an IAS in an easy way.

Today I’m going to discuss everything, which is related to an IAS.

IAS full form, Powers, Facilities & How To Become An IAS ? –

Every person interested in studies wants to achieve something like that he has a good name along with useful powers.

In the desire of this, many people dream of becoming an IAS and work hard for it but not everyone succeeds.

Actuality, when you dream of becoming an IAS, you need to work hard. But, 70% of the people fail to do it. It’s so because, to achieve this goal is not an easy task, but a herculean task.

This is so because when you have a big dream, you have to be mentally prepared for it.

Are you interested to know IG full form or SDM too ? if yes, go through links to check out the information

I have also seen that some people are already so prepared that they clear the exam in one go, but on the other hand there are some of them who work hard for many years but fail.

And the only reason for this is either you’re not mentally prepared or not able to catch what is required to become an IAS.

Even those who fail should never be disappointed because life is very big and there’s a lot to do.

Ultimately, I’ll tell you today all about IAS like IAS full form, Power, What is a qualification for IAS, Facilities, How to become an IAS, Eligibility & many more.

Well, whenever it comes to IAS, the first question that comes to our mind is what is the full form of IAS?

So, don’t worry I’ll discuss all salient information about an IAS.

It’s one of the three arms of the All India Services. Moreover, the other two are IPS ( Indian Police Service ) and IFS ( Indian Forest Service ).

An IAS-level officer has comprehensive powers in his hands.

Well, an IAS officer can be a part of the state cadre or center deputation as well as if he performs well in the initial stage, he may get a chance to represent India abroad and even may be the head of the PSUs.

In addition, he can also become cabinet secretary.

Normally, an IAS acts as a link of communication between the government and the public, many officers and employees work under an IAS officer.

No can social work be done without his permission and additionally various types of developments made by the government are promoted by the same officer.

Even an IAS officer ensures that no government employee under him is promoting bribery or corruption.

Apart from these, there is much other work in the hand of IAS.

If we talk about the facilities given to an IAS, let me tell you that whoever becomes an IAS is provided with a free car and driver along with government accommodation.

Also, in case of illness, all health facilities are provided absolutely free.

Now, if you’re excited to know how a normal person becomes an IAS, stay tuned.

Actually, you need to go through UPSC to be an IAS.

But, to take the IAS exam, you must be graduate first. It means you’ll be able to take this exam only after graduation.

As soon as you complete the graduation, you will be eligible for it. Well, I’ve seen many people who are interested to become an IAS actually don’t know what’s the process?

So, those who don’t know the actual procedure of becoming an IAS will need to be graduate first and then have to go through the UPSC exam.

It means, after completing graduation you are free to apply for UPSC. UPSC exam is done in three phases, which are Prelims, Mains and Interview.

When you complete all these phases, you get the post according to your eligibility including the post of IAS.

My answer is ‘No’. It means you can’t apply for UPSC after the 12th. To apply to UPSC you need to complete at least graduation as I already told you above.

If you know the answer to this question, that’s fine otherwise I’m telling you that If you really want to prepare for UPSC in the future, complete your graduation in BA with the subjects of Sociology, Economics and Political Science.

The most asked question about an IAS is “What is the salary of an IAS”.

If you also have a doubt about the salary of an IAS, of course, you’ll know here.

Basically, It’s a bit difficult to get the rank of an IAS, because for that you have to hold a rank under 100 in the UPSC exam.

Actually, an IAS is bigger than a collector.

It’s so because the Collector is the highest officer of Revenue Administration whereas an IAS is a chief person in any district so the man who holds this rank is called D.M ( District Magistrate ).

Ultimately, I hope the article about IAS full form, Power, Facilities and how to become an IAS will prove very helpful for you. Additionally, you must have gained valuable information.

All this information will prove excellent for every person who is wishing to know about it.

So, if you really liked this article, please share it with your friends and also those people who need it.