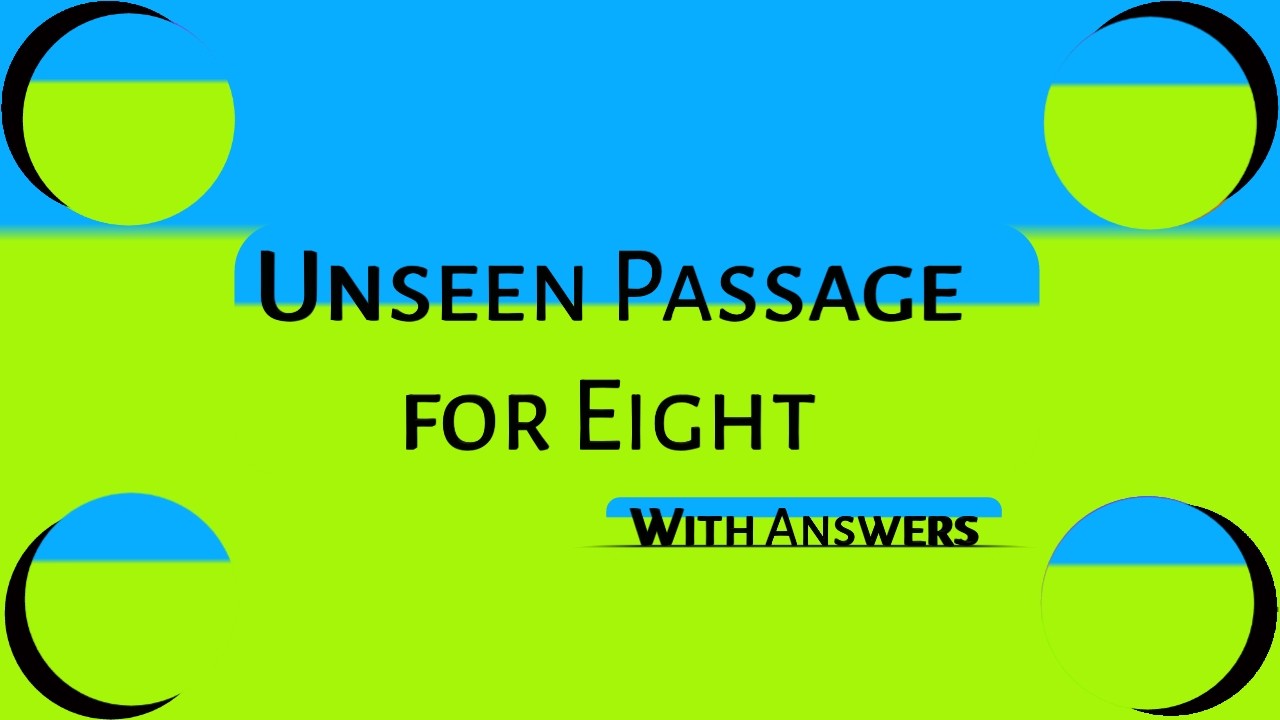 There is another name for unseen passage and that is comprehension passage, but it’s generally used in competitive exams.

In fact, an unseen passage for class 8 is easier to solve than for the upper classes, but the objective is the same for both classes.

That means whether it’s the unseen passage for class 8 or upper classes, its objective is to increase the reading and remembering skills of the students, reproducing the same passage in their words, etc.

Hence, without wasting your valuable time, let’s start writing the article about the unseen passage for class 8.

Here are totally five unseen passages for practice. Make sure you’re solving them without seeing the answers given below in the passages.

Once upon a time, a donkey was wandering in the forest and found a lion’s skin. To establish his dominance over all the animals, he wore it.

When other animals in the forest saw him they were frightened, but the donkey was so pleased that he started to bray loudly.

At the same time, a fox heard it and told each of the animals that he is not a lion, rather he is a donkey. When no one believed the fox’s words, the fox said to the donkey, “Brother Donkey ! How are you ?”.

Hearing this statement of the fox, he ran away from there.

1. Where was the donkey wandering?

2. What did the donkey find in the forest?

3. Who heard the donkey’s braying?

5. Why was the donkey so pleased?

1. The donkey was wandering in the forest.

2. The donkey found a lion’s skin in the forest.

3. A fox heard the donkey’s braying.

4. The synonyms are terrified and happy respectively.

5. The donkey was pleased because other animals were considering him a lion.

Practice also, some other unseen passages in English.

Thomas was a great scientist and worked hard all his life. His full name was Thomas Edition.

Even today the world remembers him because of his inventions such as the Light bulb, Gramophone, Movie camera, Automatic telegraph, etc.

One of his most popular inventions was the light bulb.

All his inventions have greatly benefited the world. He died in 1931. When he died, electric lights were extinguished all over America upon his death.

The secret to the success of Edition was good health and hard work. Edition married twice and was the father of six children.

1. What was the full name of Edition?

3. How many children did Edition have?

4. What was the secret to the success of Edition?

1. The full name of Edition was Thomas Edition.

2. Edition was a scientist and inventor of some useful machines.

4. The secret to the success of Edition was good health and hard work.

6. Thomas Edition and his inventions.

Practice these unseen passages with questions and answers.

Among the ancestors of Lord Rama, there was a king named Dalip. He was very religious, but he had a problem.

The problem was that he had no son. Therefore, on the advice of Guru Vashishtha, he and his wife started serving a cow named Nandini.

One day, a lion pounced on the cow. Seeing the cow in distress, the king immediately pointed the arrow but his hand stopped. The lion said that the cow is my prey, so I will eat her.

Hearing this, the king said, please don’t do so and instead of her eat me.

2. What advice did Guru Vashishtha give to Dalip?

3. Why did the lion pounce on the cow?

1. Dalip was a religious king among the ancestors of Lord Rama.

2. Guru Vashishtha advised him to serve a cow.

3. The lion pounced on the cow because he wanted to eat her.

5. The name of the cow was Nandini.

Mahatma Gandhi was the greatest man of his time. He was born on 2 October 1869 at Porbandar in Gujrat. His father was a princely minister and his mother was an ideal woman.

He studied law in England. After coming back from there, he started advocating in South Africa.

But, when he knew about the poor condition of Indians living in South Africa, he started the Satyagraha movement.

He considered truth and non-violence as the best weapons for the attainment of India’s independence.

In the end, truth and non-violence prevailed and British Empire had to accept its defeat.

1. When and where was Mahatma Gandhi born?

2. What were the best weapons of Gandhi?

3. Where did he complete his law degree?

4. Which movement was made to improve the condition of Indians by Mahatma Gandhi?

5. Write an opposite word of Prevail.

1. Mahatma Gandhi was born on 2 October 1869 at Porbandar in Gujrat.

2. Truth and non-violence were the best weapons of Mahatma Gandhi.

3. He completed his law degree in England.

4. Satyagraha movement was made to improve the condition of Indians by Mahatma Gandhi.

5. The opposite word for prevail is ‘fail’.

The dams are very important to save the water of our rivers for irrigation and control the floods in the rivers.

When the gates of the dams are opened, water flows down the rivers and consequently floods occur.

Moreover, the dams are used to make electricity. When the waterfalls on the wheel machines from the dams, electric current is produced.

Another importance of dams is that water can be distributed evenly between the locations after storage.

1. Why are dams important?

2. When do floods occur?

3. What is the second use of dams?

5. Suggest a suitable title for the above passage.

1. Dams are important because they save water and control floods.

2. Floods occur when the gates of the dams are opened.

3. The second use of dams is to distribute the water evenly between the locations.

4. Irrigation means the process of applying some amount of water into the ground.

A lion was standing near his cave. He was very weak and old.

One day, a deer came there. As soon as the lion saw a deer, he said to him, “Brother, Come here, You look very intelligent and no one is here.”

The deer said, “I am very scared and feel nothing less than a threat to come there.”

The lion again said, ” Oh! I am very weak and old to kill you, so there is no need to worry, moreover, you can see how many footprints coming towards my den.” He further said, “Many friends came to meet me like a jackal, buffalo, cow, zebra, deer, etc.”

Then, the deer said, “Of course, I can see many footprints going towards your den but none is coming out.”

Saying so, the deer ran away and the lion remained hungry.

Q1. When the lion was standing near the cave, he saw a

Q2. The deer said that he

( b ) Wanted to do friendship with a lion.

Q4. The same word for scared is

Q5. The story teaches us

( a ) There are a lot of animals in the forest.

( b ) Lion is a very intelligent animal.

( c ) Sweet words can take you into trouble.

Unseen passages with MCQs are very easy to solve, only you have to read the passage carefully.

It’s believed that the Ganga is a very sacred river for Hindus. People also call it by the name of Mother Ganga.

The length of the river is about sixteen hundred miles and it’s the largest river in India. It originates from the Gangotri mountains in the Himalayas.

In 2008, the river was declared the national river of India. Many saints and priests live on the banks of this river and every day they take a holy dip in it.

Additionally, the river brings rich soil and spreads it over the land to make it very fertile. After death, people want their ashes to be immersed in the Ganga so that they can reach heaven.

Q1. The river is also called by the Hindus

Q2. The land is made fertile by

Q3. Many saints and priests live on the banks of the river

Q5. A suitable title for the passage is

Ultimately, I hope that the article must have satisfied you.