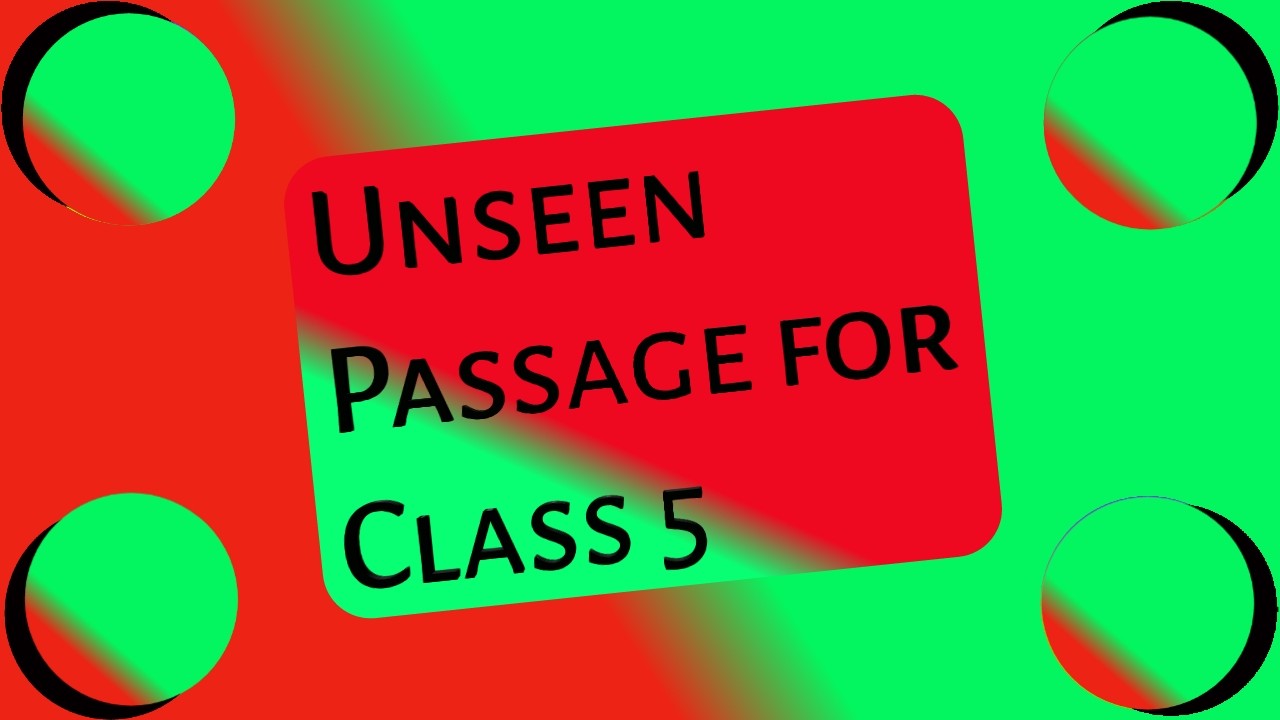 Today, I’m going to write an article about the unseen passage for class 5.

In addition, these passages also check whether students are able to answer the questions correctly or not.

Hence without wasting your valuable time, let’s start the topic that is about the unseen passage for class 5.

Keep in your mind, here I’m going to discuss unseen passages for class 5 only and not for the upper classes.

Read also, some other unseen passages.

If you’re looking for an unseen passage for class 5th or 5 unseen passages with questions and answers, you have come to the right place.

As you can see each unseen passage for class 5 with MCQ questions so that you can find out the right answers for the given questions.

1. Unseen passage for class 5 | The Iron Man of India

Sardar Patel is known as the Iron Man of India and he was a great leader in the 20th century. He died almost 2 years after the death of Mahatma Gandhi.

He was so emotional and kind-hearted person that when his followers were concerned, he also looked very disappointed.

Sardar Patel was the man who had no problem organizing the affairs because he had a very sharp mind. Additionally, he was very skilled to select the right person for the right posts.

He was the Home Minister of India when India-Pakistan War took place in 1947.

1. Sardar Patel is known as

2. He had a quality that was

( a ) Encouraging the people.

4. He was very disappointed when

( a ) His family faced difficulties.

( d ) His followers were concerned.

2. Unseen passage for class 5 | The Crow

We often see the crows on the top of our buildings, but they like open spaces where there are dense trees.

By the way, the crows live alone but whenever one of them dies, the other crows hover around it to mourn.

Dead animals are the favorite food of the crows. Crows are neither vegetarian nor non-vegetarian. That means, they eat anything.

The average lifespan of a crow is 14 to 15 years. A crow can lay up to four eggs at a time.

2. When do other crows hover?

( a ) When they are thirsty

3. Crows are not found in

4. The favorite food of the crows is

Read, some other comprehension for class 5.

Lord Rama loved his wife very much. He was very intelligent and courageous. He had three other brothers named Lakshmana, Bharata, and Shatrughna.

Once he went into exile and returned to his homeland after 14 years. When he returned, people lit the lamps of ghee and celebrated Diwali on that day.

The forest where Lord Rama had spent 14 years of his life was named Dandakaranya.

1. What were the names of Lord Rama’s brothers?

3. How many years did Lord Rama spend in the forest?

4. What did people do when Lord Rama returned to his homeland?

5. In which era Lord Rama was born?

1. The names of Lord Rama’s brothers were Lakshmana, Bharata, and Shatrughna.

4. People lit the lamps of ghee and celebrated Diwali when he returned to his homeland.

4. Unseen passage for class 5 | The Dogs

Dogs are very clever and intelligent animals. Their ability to smell things is many times greater than that of humans.

They can easily identify the sniffed thing by smelling it again. Dogs are also used to detect explosives due to their high smelling ability.

Their hearing power is five times more than that of humans.

Dogs are deaf, blind, and toothless when they are born. They like to live in groups, but some prefer to live alone.

The breed of dog Alaskan Malamute has the ability to withstand temperatures up to -70 degrees. Dogs have many body colors. Mostly we see white, brown, and black dogs.

2. Breed Alaskan Malamute can bear temperatures up to

3. Mostly we see dogs in

( a ) Brown and white colors

( b ) Blue and black colors

( a ) Six times more than humans

( b ) Four times more than humans

( a ) Due to more intelligence

( b ) Due to their high-smelling ability

See, some other reading comprehension passages with questions and answers.

5. Unseen passage for class 5 | The Education

There was a child whose name was Roshan Lal. He lived in Panipat. His father’s name was Mohan Lal who died when his son was very young.

Roshan Lal left his primary education due to his poor economical condition. After that, he decided to join a military school where no fees were charged.

On the strength of his hard work, he became an officer in the army.

Due to having lots of difficulties in his life, he determined that no child would be deprived of his primary education.

When he was 56 years old, he met a boy whose name was Rishabh. That boy was very skilled in running and jumping, but he had no parents.

Roshan Lal adopted that boy and made him an officer in the army.

1. Who was the father of Roshan Lal?

2. Where did Roshan Lal live?

3. Which school did Roshan Lal join after the death of his father?

5. Why did Roshan Lal leave his primary education?

1. The father of Roshan Lal was Mohan Lal.

3. Roshan Lal joined a military school after the death of his father.

4. Roshan Lal met a boy whose name was Rishabh.

5. Roshan Lal left his primary education due to his poor economical condition.

India is our motherland. It includes more than six lakh villages.

The capital of India is New Delhi. The largest river in India is the Ganga. Many cities are inhabited on the banks of this river.

Uttar Pradesh is the largest state in India in terms of population. Almost seventeen percent of the total population lives in Uttar Pradesh.

Maharashtra is the second-largest state by population.

The Himalayan Mountains are in the north of India. They are the most famous mountains all over the world.

2. Which is the largest state in India?

3. What percentage of the total population lives in Uttar Pradesh?

4. Which is the second largest state in India?

5. Where are the Himalayan Mountains located in India?

1. People liked to live in the villages earlier.

2. Uttar Pradesh is the largest state in India.

4. Maharashtra is the second largest state in India.

5. Himalayan mountains are located in the north of India.

Apart from being a politician, Atal was also a great poet. Many of his self-written writings are famous all over India.

After the formation of the Bharatiya Janata Party on 6 April 1980, he was given the responsibility of the presidency.

In order to maintain good relations with Pakistan, he started a bus service from Delhi to Lahore in 1999 and became the first passenger of that bus.

He met Nawaz Sharif in Pakistan.

1. When was Atal Bihari Vajpayee born?

2. To whom did Atal Bihari Vajpayee go to Pakistan to meet?

3. When did he receive the Bharat Ratna Award?

4. Who was Krishna Bihari Vajpayee?

5. Where was the bus service started?

4. Krishna Bihari Vajpayee was a teacher.

5. The bus service started from Delhi to Lahore.

8. Unseen passage for class 5 | Nita and her Family

Nita is the dearest of all the family members. She is the youngest girl in her family. She likes to eat mangoes only in summer. When she starts eating mangoes, she eats about three to four mangoes one after the other.

Her father says nothing but her mother scolds her for eating too many mangoes at once.

Also, she makes her understand that eating too many mangoes causes pimples and boils on the body. She listens very attentively to her mother for a while but does the same again the next day.

Her uncle loves her very much and often takes her on rides. She enjoys the way and eats a variety of dishes with him.

3. What does Nita ask her mother before going to sleep?

4. How many mangoes does Nita eat in one go?

5. What does Nita’s mother make her understand?

( a ) eating too many mangoes causes an allergy

( b ) eating mangoes is harmful to health

( d ) eating mangoes is not good for your health.

I hope that the article must have satisfied you. Now, you’ll have no problem solving any type of unseen passage for class 5th.