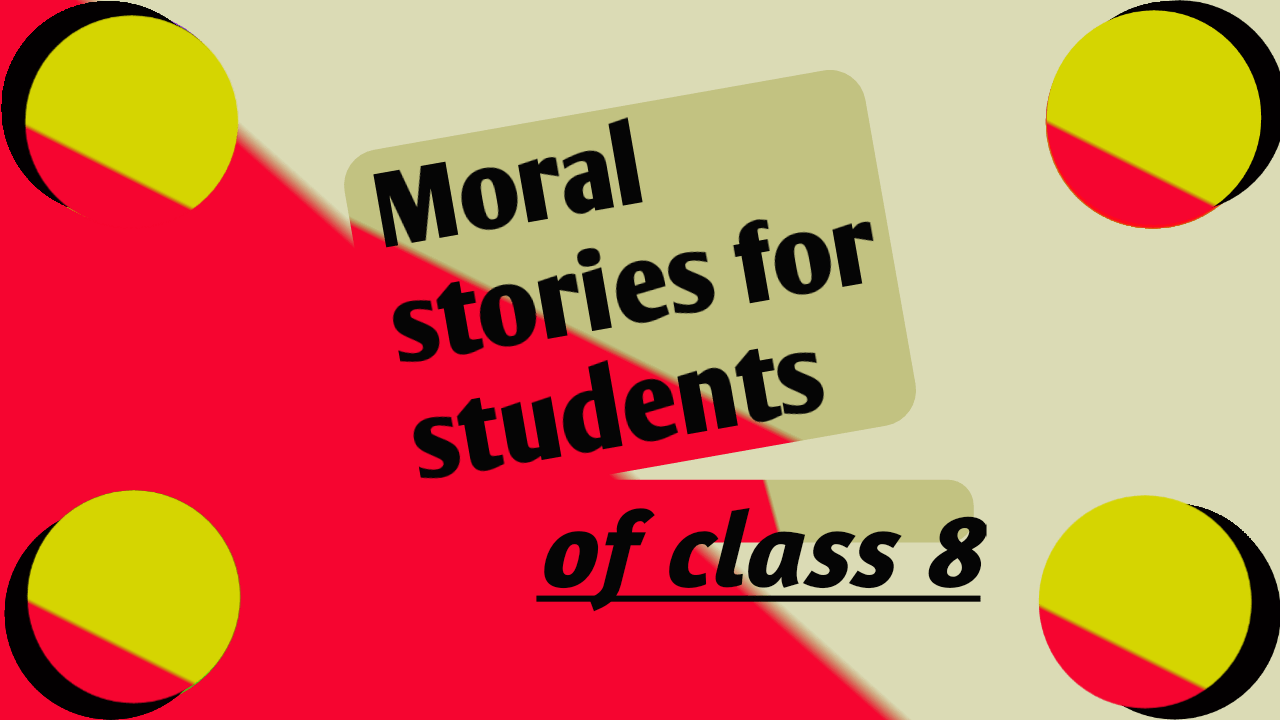 Today, in this article, I’m going to write some moral stories for students of class 8. However I’ve already written many articles on moral stories, but they belong to other classes.

The reason for writing moral stories is to develop moral education in the students. Such stories not only affect the daily life of the students but also develop socialism in them. So, students must read such stories.

Also, read some other moral stories.

Moral Stories for Students of Class 8 in English

Here are some moral stories for students of class 8. They are completely free to read these stories for their moral education.

There were some fishermen on the bank of the river. They were making their nets to catch the fish. After preparing the net, as they cast their nets into the river, many fish got caught in the net.

Seeing this, all the fishermen became very happy.

They repeated the same work, but this time they saw that there was no fish in the net, so they decided to take a break for some time and went away from the river.

Beside the river, there was a coconut tree on which a monkey was sitting watching all the activities of those fishermen. He also thought of doing the same work that was being done by those fishermen. As he started doing it, he got caught in the net and started drowning in the river.

When the fishermen saw some activities on the bank of the river, they ran towards the river and saw a monkey trapped in the net.

Seeing this, they pulled that monkey out of the trap and saved his life.

The story teaches us that we should never do things that we are unaware of.

2. A deer chasing a lion

Once upon a time, a dog and a deer were having a meal together. They were enjoying a lot with each other.

Suddenly, they saw a lion coming towards them.

As soon as the dog’s eye fell on the lion, he started barking loudly. Hearing the loud voice of the dog, the lion got scared and left the place. Seeing the whole incident, the deer thought of making fun with the lion and started chasing him.

The deer chased the lion for a long distance but at one point it came that the dog’s voice stopped being heard.

As a result, the lion turned back and hunted the deer with his paws.

The moral of the story is that we should never do any work without knowing our potential.

There lived a herd of buffalos in a jungle. All the buffalos loved each other and never fought.

Once a cheetah entered the jungle and started killing buffalos one by one. As a result, the number of buffalos started decreasing in the jungle. Seeing this, all the buffalos got scared and started thinking that if it continues, one day there will not be a single buffalo in this jungle.

That’s why all the buffalos planned to drive the cheetah away from the jungle.

Like every day, the cheetah was entering the jungle to kill the buffalos, when a herd of buffalos attacked that cheetah and drove him away on the strength of their unity.

Consequently, that cheetah never came to the jungle.

The moral of the story is that we can even accomplish the impossible tasks with our unity.

In a village, a shopkeeper sold his fruits at very high prices, which brought him a lot of profit. But, he wasn’t happy with it because he wanted to earn more profits.

So, he thought of wrongdoing. Whenever any customer came to buy fruits from him, he cleverly reduced the weight by 150 gms from each. Now, he was earning more money. One day his friend came to buy some fruits from him and he did the same with him.

When his friend got suspicious, the shopkeeper told him that it was his illusion.

His friend went to another shop and checked the weight of those fruits. He found that the weight of the fruits was reduced by 150 gms. Consequently, he came back to his friend’s shop and scolded him for his dishonesty in front of other customers, which left him deeply embarrassed.

Now, the other customers who were standing at his shop also left without taking fruits from him.

The story teaches us that we should always be honest about our work.

5. The fruit of hard work

There lived a very knowledgeable Pandit in a village. He was about 90 years old.

He knew the mantra of subduing people, but he was worried that he should tell that mantra to someone who would never misuse it. That’s why he called some abstemious and intelligent boys of that village.

He told them that whoever would be successful in the task given by him, he would tell him the mantra of subduing people, and whenever they feel any trouble in the future, they can use it.

All the boys were very excited and ready for the task. Pandit said, “Whoever does penance with me for seven days without eating or drinking anything, I’ll tell him that mantra.” All the boys did their best, but only one boy was successful to do so as his willpower was very strong.

Consequently, the pandit recited that mantra to the boy and appreciated his willpower.

The moral of the story is that if your willpower is strong, you can do any work very easily.

A lion and a lioness lived together in a forest. They had a child. They loved each other very much. The lion was intelligent and courteous to other animals.

Whenever there was a fight between two animals, only the lion would go to resolve the dispute. But, the lioness was very conceited and always used to degrade other animals. That’s why no animal liked her.

One day the lion went out somewhere and the baby of the lioness got lost due to which the lioness was very upset.

She started searching for it. Whenever she asked the other animal about her baby, she didn’t get any reply. As a result, she deeply regretted it and started crying.

Then, one of those animals told her that her baby was playing near the pond. She went running and was happy to see her baby there.

She came back to all the animals and apologized for her rude behavior towards them.

The story teaches us that we should never be arrogant or humiliate people in our life.

An old dug well was lying dry in a village. Its depth was around up to 30 feet.

One day some children were playing near the well and they saw that a snake fell into that. All the children tried hard to get it out but they failed to do so. Seeing this, some villagers gathered there.

They also tried to get it out with ropes and buckets but they failed. No one was trying to go down in the well as it was poisonous.

When all the tactics failed, they went away from the well. After a few days, they saw that the snake was dead.

The moral of the story is that sometimes our dangerous image in society can lead to our death.

Ultimately, I hope that the article about the moral stories for students of class 8 has proved to be very helpful for you.

I’m making sure that after reading these moral stories for students of class 8, you will definitely learn something about your life.